The following was prepared by Molly Gauthier.  She began her love affair with astrology in 1996. Molly specializes in forecasting, electional astrology, medical astrology, and medical elections– selecting optimal astrological dates for surgery and medical procedures.

Astrology of a knee surgery

A quick look at Scott’s birth chart shows that he came in with a lot of Capricorn. Capricorn on the ascendant, with Capricorn’s ruling planet, Saturn, also at home in Capricorn. And Capricorn has a special affinity for the knees.

The first house and Ascendant are important in medical astrology. His first house has Mercury, also in Capricorn. Mercury is friendly, busy-busy-busy, and always thinking– in a Capricorn way in this chart. Careful, deliberate. With a tendency to anxiety. Between you and me, Scott can be a bit of a stress junkie.

When Mars activates planets in the birth chart, that’s a signal that accidents and injuries are more likely. Mars-Uranus is an especially accident-prone combination. The Mars activity at the time of the injury and in the months to come shows the level of pain and difficulty during the early stages of his recovery.

The transit Sun and Moon were involved in the picture as well and may have behaved as “triggers” for the accident.

The good news: Transformational Pluto was crossing Scott’s North Node, which is a point where “karmic goodies” and growth opportunities enter one’s life. Ultimately this healing journey led Scott to his career in Rolf Structural Integration.

Transit Pluto also squared Scott’s Mercury at the time of the accident, bringing a total evolution of the way he identified in the world and experienced his surroundings. 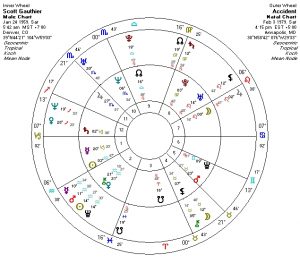 The run-up to surgery

Our cross-country move involved three road trips from Colorado to Virginia. Air travel, too. That would challenge anyone physically… and for Scott, the time had finally come for him to admit to himself, the knee really hurts. His work with other practitioners put Humpty Dumpty back together again and again. They kept his knee functioning well for almost 40 years.

It became obvious last Fall that the time had come to think about a knee replacement.

Let me first say that the most important prep work is to choose the surgeon. Scott and I interviewed 3 surgeons before we found one we felt comfortable with.

I have been helping my clients choose dates for surgery since about 2005. This is my process, in a nutshell:  First, I consider the changing nature of the planets in the sky. They tell me the astrological “weather,” and that gives me a good enough sense of how the surgical workplace will be functioning on that day. If I see a trainwreck in the sky, I cross that date off the list.

A second question I consider is, how compatible is the patient with this date? Ideally, there will be some support for my client’s surgery and recovery.

When it comes to choosing dates for surgery, options are often limited. The surgeon’s schedule is a limiting factor. It’s often the case that there are only a handful of dates to choose from.

Why this date for surgery?

Scott’s surgery date does not check every box for an ideal surgery date. But it has these things going for it:

Summer 2019 and beyond: a message for everybody